Isabelle and Antoine quit their engineering careers in 2017. They sold everything they owned and moved into a converted Ford Transit. Every day since, they have been following their passions of mountain biking, splitboarding and adventure! 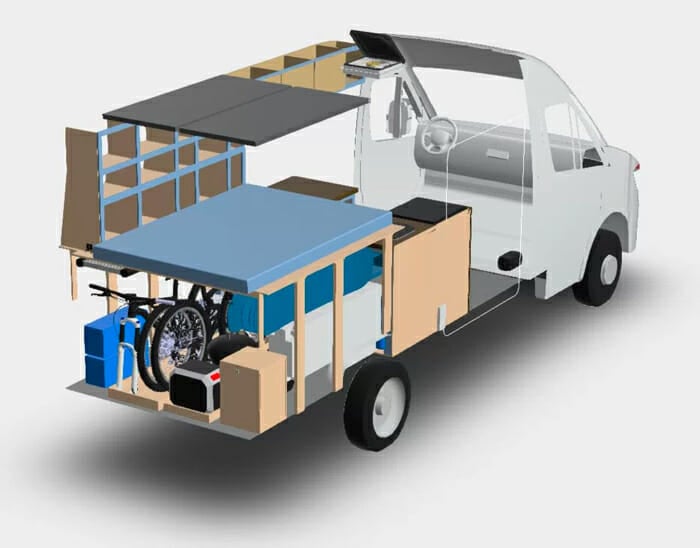 What did you learn that you didn’t expect by modeling your van in CAD?

We learned that our initial layout wouldn’t work so well! Doing the 3D model allowed us to play around with different layouts and settle with the most functional one for our needs. It also helped optimize the living VS storage space so every cubic inch is used to its full potential. It also forced us to overthink all the details before we start the conversion, so we build only once.

What was the most difficult part of the construction process for you?

The fact that we had absolutely no experience building stuff and that we had very few tools. We would have saved SO MUCH time having proper tools! If we had to start over, we would buy second-hand tools and re-sale them when we’re done.

Is there anything that you did differently during the build that you hadn’t seen done before?

While our van build is unique, all the bits and pieces are not; it’s a melting pot of other’s ideas that, carefully chosen and assembled together, work best for us. So thanks to everyone that shared their build before us! 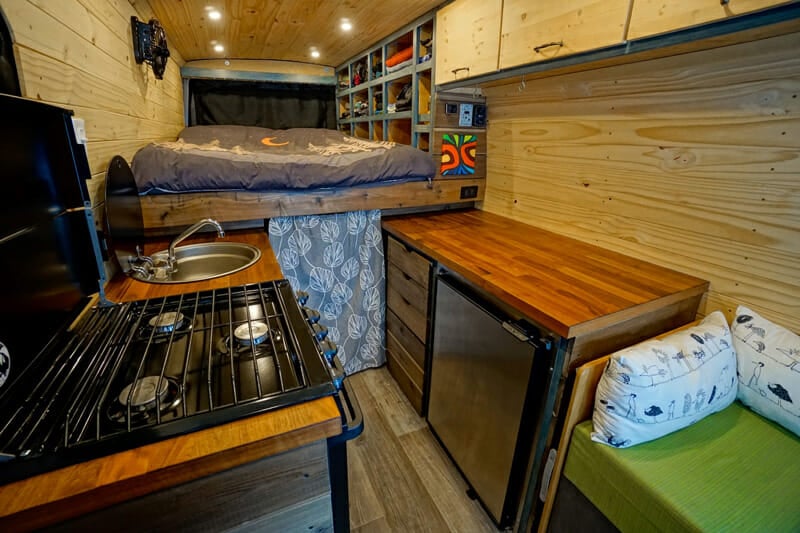 Now that you’ve been on the road for a while, If you could change one thing about the layout or design of your van what would it be?

Because we invested a lot of time in identifying our needs and creating a 3D layout, we think we nailed it! We’re very happy with our layout. Don’t get us wrong: we’re not pretending it’s the perfect van, there are a few things we would change. For example, we recently did the exercise of re-thinking our electrical system following the experience we gained living full-time in the van. That led us to produce new wiring diagram that’s available here. We deleted some features we didn’t use in the real world and we made the system much easier to understand, install and operate. We also designed it so anyone can adapt it to their needs. Check it out!

What is your favorite recipe or snack in the van?

We installed a propane range with stovetop and oven, so we’re still cooking the same meals that when we lived in a house. Cooking is a passion for Isabelle, she always comes out with new ideas and experiments; we rarely eat the same thing! The range and the countertop use a lot of space in the van, but it makes cooking much more enjoyable so we don’t crave for restaurants; it’s better for health and for the budget!

What’s the most extreme weather you’ve ever spent the night?

While in Fernie and Kicking Horse (BC, Canada) for snowboarding, we had a two week period of extreme cold where the temperatures went down to -27C almost each night. If you never experienced that, you can’t possibly imagine how cold this is! Being from Quebec (Canada), we’ve seen that quite often; but it was a first in the van, so we were a bit anxious. Fortunately the insulation, the insulated window covers, and the Webasto heater did their job and we could keep the inside of the van at around 20C, nice! We were also happy to confirm that our water system works in these temperatures, since we installed the tank and the plumbings inside.

Check out the Webasto heater install on FarOutRide.com! 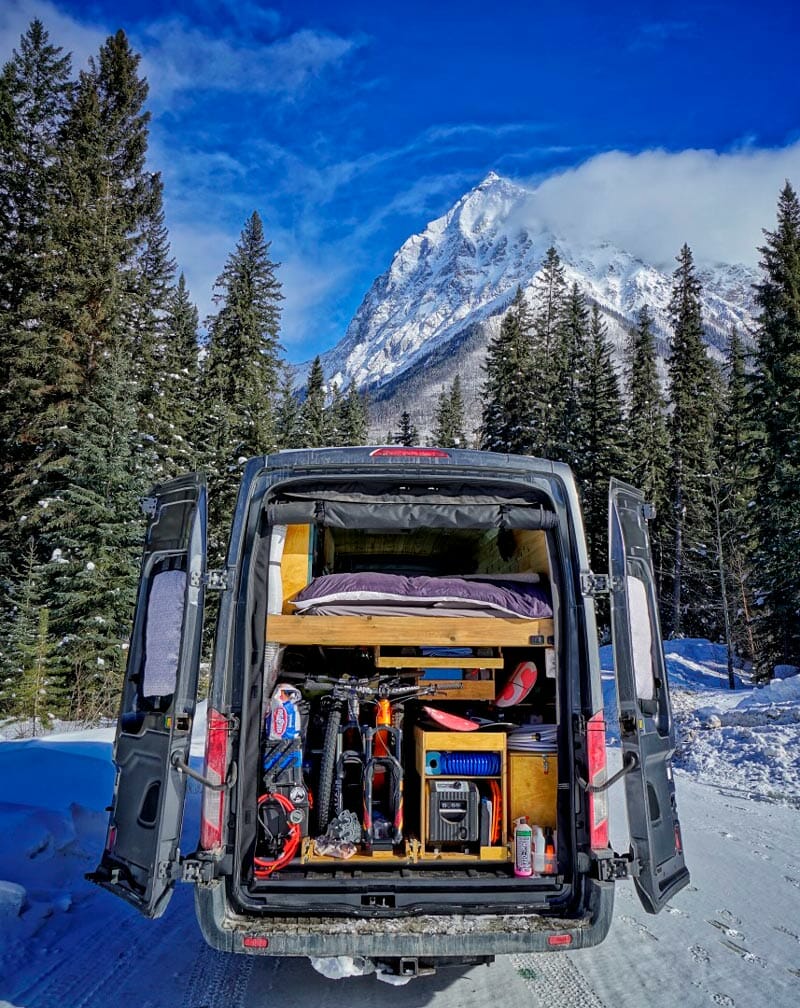 What is one place you want to take your van that is still on the bucket list?

Alaska! As splitboarders (a splitboard is a snowboard that can be separated into two ski-like parts used with climbing skins to ascend slopes the same way alpine touring or telemark skis are) we’ve always been dreaming of going there. Now that we have our own cabin on wheels, it’s perfect; no excuses! See you there in 2019!

Living in a van is awesome, but that’s not the point. We designed this lifestyle around our passions: mountain biking and splitboarding. The van is an enabler of this lifestyle. So obviously: MOUNTAIN!

What is one piece of advice you would give someone thinking about building a van?

We’ll go ahead and pass an advice that were given to us before the build: Estimate the time you think you will spend on the build, then multiply that by two! It ALWAYS takes more time than anticipated… you see, there are no square edges in the van. No straight walls. No reference to level. And as opposed to building a house, there are no standards to follow. We expected that the pace would go faster as we progress (learning curve), but it turns out every new task is different from the previous one… we tried to track the time we spent building; it’s all here: cost and labor. It’s a big project for sure, but it’s very rewarding!

What type of van is it?

2016 Ford Transit with a 148″ Wheel Base. Extended Length, High Roof.
See all of the van details here.

Approximately how much did it cost to purchase?

We bought the van new, and the sticker prices in Canada are different than in the USA; so I normally don’t mention the price not to confuse people and I refer them to the Ford Website. We paid 39K$ CDN before taxes; 45K$ CDN after taxes.

Approximately how much did you spend building it out?

Wanna see how it was built? Read the full build journal on FarOutRide.com

Isabelle and Antoine quit their engineering careers in 2017. They sold everything they owned and moved into a converted Ford Transit. Every day since, they have been following their passions of mountain biking, splitboarding and adventure! 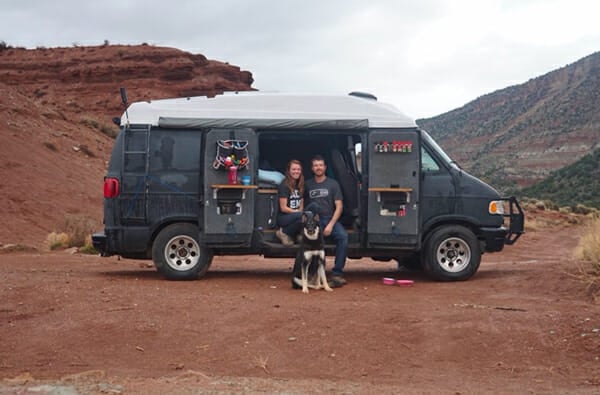 Hello! we are Kate and Ian. We moved into our Dodge B1500 in March 2017. Read our story and let us help you build your next adventure!
Copyright © ParkedInParadise.com | Disclosure: We are a participant in the Amazon Services LLC Associates Program. As an Amazon associate we earn from qualifying purchases.
Most outbound links are affiliate links - we may receive commission. We are independently owned and the opinions expressed here are our own.
Exclusive Member of Mediavine Travel • Disclosure • Privacy Policy • About Us • Contact