Solar panels cannot directly charge a battery. To get chaotic energy from the sun into usable energy for your batteries you need to use a solar charge controller.

Most ’12 Volt’ solar panels produce around 16-20 Volts when in direct sunlight. Batteries are finicky, and if they get too much voltage they get stressed and damaged.

A solar charge controller regulates this. Charge controllers can also keep track of roughly how much power is currently in the battery for smart charging cycles. 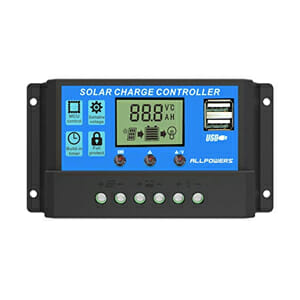 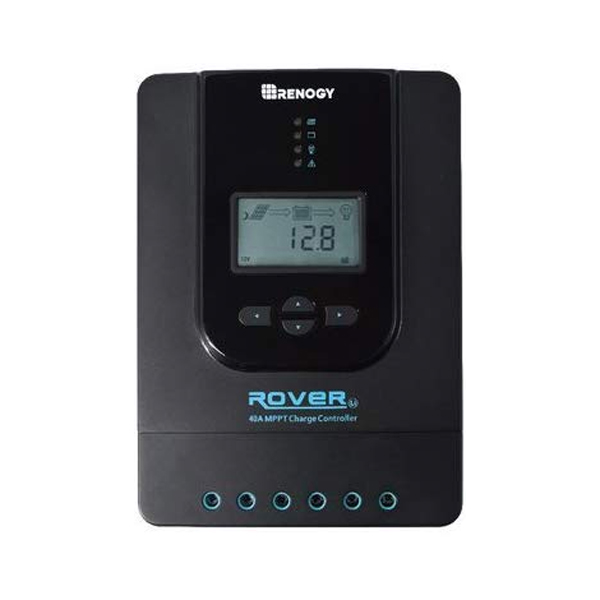 30A MPPT Charge Controller. Comes in additional sizes from 20A-100A. 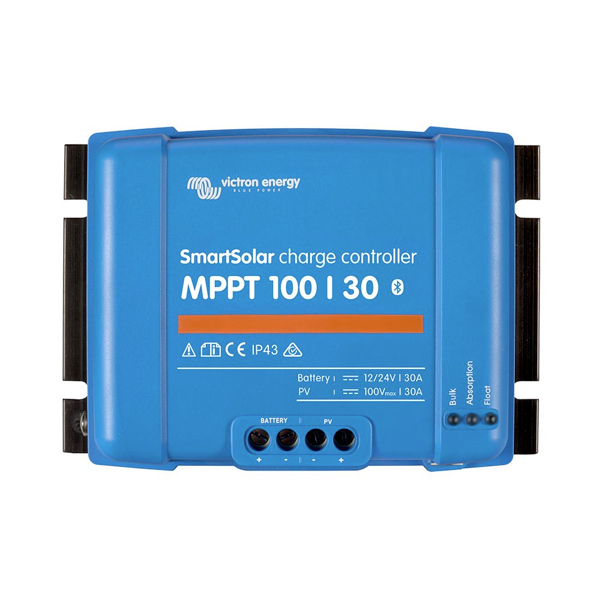 Why Do You Need A Solar Charge Controller?

There are two types of solar charge controllers: Standard (PWM) and MPPT.

Pulse Width Modulation (PWM): PWM technology is simple and has been used for decades in solar system installs. This set up is cheaper and there are fewer internal parts to break.

When a solar panel produces 18v of electricity, the charge controller has to convert that to a safe 13.8V that is healthy for the batteries. Standard charge controllers will effectively throw away any voltage above 13.8V so you lose some of the energy produced.

Note: If you ever come across an inexpensive charge controller that says something like “MPPT simulating”, it’s just a PWM in disguise. There’s no way to make the internal electronics cheap.

Maximum Power Point Tracking (MPPT): An MPPT solar charge controller is more complex. It changes input Volts from the solar panels to match the output volts needed for your batteries without having to throw much energy away.

For example, if your panels are producing 18V at 6 Amps, the charge controller will adjust this by dropping the Volts to 13.8 and increasing the Amps to something like 7. Your batteries get the most available power from increasing the amps this way.

How To Wire Solar Panels With A Charge Controller

There are two ways to wire solar panels together: series and parallel.

Wire solar panels in parallel if you have a PWM controller; this way you will get more Amps. Keep in mind, panels wired in parallel need combiners, fuses, and bigger wires. All of these things cost more money and time to install.

Wire solar panels in series if you have an MPPT controller. This leads to an input higher voltage and allows the charge controller to figure out the most efficient way to distribute power. No fuses, combiners, or oversized wires are necessary.

There are still plenty of cases where a PWM controller is more economical than an MPPT controller. If you get a 120W panel and a PWM charger, it will be cheaper and produce more energy than a 100W panel an MPPT. This is usually only true for about 600W and less of solar, which makes it quite relevant to van dwellers who only need a small system.

How To Size Your Solar Charge Controller:

As a general rule of thumb, we recommend at least 7.5 Amps for every 100W of solar.

This is our recommendation if you have a 12v battery bank. Getting a larger solar charge controller will have no negative effects other than price. And it will allow you to add more panels later if your setup proves to not be enough.

For example, if you have a 300W panel setup, you need at least a 22.5A charge controller. There is no reason to cut it close, so get the common 30A charge controller size. This is big enough to add another 100W if you find you’re not getting as much sun as you were expecting later.

First and foremost, always connect the solar panels last. You don’t want current running into the controller with nowhere to go! Read the instructions for your specific controller, but here is what to generally expect:

What Is Load Output (LVD)?

The third set usually says LOAD or LVD. This output is designed to be a level of battery protection and there are two schools of thought on this. But first, where do these wires go?

The load output is meant to power all of your small electronics through the charge controller. So you’d have the (+) wire run to a DC fuse box that is connected to your lights, refrigerator, usb chargers, etc. And the (-) wire connects to a bus bar for the return wires of all these electronics.

If the batteries drop below a certain voltage, the solar charge controller will cut power to the fuse box to protect your batteries from being drained further.

Some smart charge controllers will adjust this voltage cutoff if your batteries aren’t getting full charge daily. This is how wiring to the load terminals looks (fuses omitted):

We don’t find the benefits of this feature all that helpful. Instead, you can wire your fuse box directly off of the batteries, as shown below (fuses omitted):

Both ways are just as safe and easy to wire, so you can choose to do it however you wish. Here are the reasons we like it better without the load terminals:

What Is A Solar Ready RV?

Many RV salesman will claim their motorhome is “solar ready.” This can mean any number of things, most commonly:

In either case, solar panels are not included and the charge controller is undersized or non-existant. Solar-ready RVs are not worth the added expense. If you want to do a lot of boondocking off-grid, you should invest in an RV solar panel kit with an appropriately sized charge controller.

Some of our favorite charge controller brands are Renogy, Victron, WindyNation, HQST, GoPower! and ALLPOWERS.

Sizing Your Electric System
Parts Of An Electric System
Electricity Extras
Copyright © ParkedInParadise.com | Disclosure: We are a participant in the Amazon Services LLC Associates Program. As an Amazon associate we earn from qualifying purchases.
Most outbound links are affiliate links - we may receive commission. We are independently owned and the opinions expressed here are our own.
Exclusive Member of Mediavine Travel • Disclosure • Privacy Policy • About Us • Contact