A power station allows you to charge up electronics like cell phones, laptops, and portable refrigerators off-grid when there is no power source nearby. These products are perfect for overlanding, weekend camping trips, or charging up the ebike for a multi-day ride.

If you’ve read our post on best solar generators, you know how convenient a power station can be. Jackery recently sent us one of their newest units: The Explorer 1000 to test out and share the features. We’re going to go over what you can expect from the Explorer 1000; and the best use cases for campers. 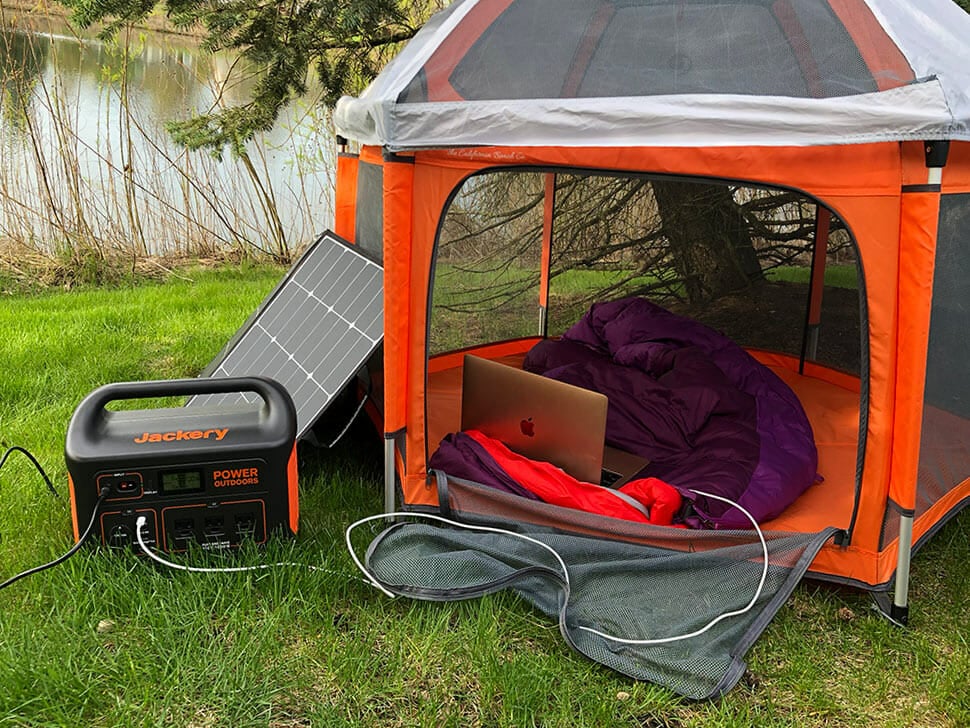 What Is A Portable Solar Generator?

Power stations are often referred to as solar generators. This term can be misleading because they don’t generate power like a typical gas or diesel generator. Instead, they store power to be used for later.

You can think of a solar generator as a portable power bank. Inside there is a battery, charge controller, inverter, wiring, and all the outlets needed to plug in your devices

You can charge a solar generator in three ways:

After the power station been charged, just plug in your electronics and use them as you normally would. Most solar generators come with both 120v AC plugs and USB outlets making them compatible with nearly all of your devices.

Why Use A Portable Power Station?

If you frequently go camping off-grid, boondocking, or simply want to power a mini-fridge in the backyard, these are great pieces of equipment to have.

Power stations have a lot of advantages over building your own DIY solar system:

Safety: You can’t go wrong with wiring, fuses, and choosing incompatible components. They simply work out of the box with no maintenance required.

Portability: These devices are designed for movement and heavy vibrations during travel. Most importantly, they are lightweight and easy to transfer from one location to another. When you build a custom solar system, you’re often limited by where it was installed and the layout of your original design.

Quiet and environmentally friendly: Unlike a regular generator, solar generators do not use liquid fuel or create fumes. You can stand next to them or place them in a tiny tent without fear of off-gassing. They’re also silent which makes them much more enjoyable on a camping trip.

Adaptability: A power station can work anywhere. Not only in your tent or RV, but also at a backyard BBQ or in your unfinished shed or as an emergency backup.

The Explorer 1000 contains three 110v AC outputs, one 12v DC outlet, two USB-C, and two USB ports all encased in a 22-pound power station. The unit has a built-in carry handle and comes with both a car charger cable and an AC power cable.

Inside the device, there is a 1,002Wh Lithium-ion battery, charge controller, and 1,000W pure sine wave inverter with a 2000W peak. That means it can effectively power cell phones, laptops, cameras, drones, and car fridges.

The limiting factor with these power banks is the inverter.

My hairdryer, for example, draws 1875W of power. The Explorer 1000 will start my hairdryer (because it has 2000W surge), but after a few seconds the device shut off. That’s because the inverter is unable to sustain 1875W without overheating.

Put simply, here are a few common devices and their estimated recharges with the Explorer at 100% capacity:

This Power Station Is Ideal For Camping and Outdoor Outings

The Jackery has one of the simplest plug-and-play designs you can get. We like that it’s straightforward to charge and gives a clear reading of your power use.

However, we would not recommend this product for hardwiring electric systems in a camper van or RV. This is because there are no 12-volt “press-in” style ports to connect to your vehicle wiring. (see image below)

Most weekend campers won’t be deterred by this limitation because usually, the goal is to charge up some cameras and a drone. For hardwired systems, we recommend these power stations. 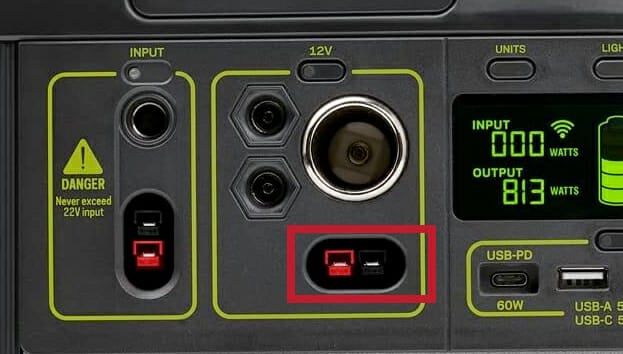 Keeping track of your charge

The digital display on the front of the Jackery Explorer lists power level percentage, input/output, and indicates the temperature.

Power Level Percentage: This is the amount of battery left in the power station. You should also avoid letting your power station sit for long periods of time on less than 20% charge.

Input and Output: Your electricity draw is measured in Watts (W). Large devices like a portable refrigerator can draw as much as 60W while a cell phone will only draw 12W. The Explorer will automatically shut off if the output exceeds 1000W continuous.

That means if you plug in a high-powered device that power station can’t handle (like a hairdryer) it will automatically shut down for safety purposes.

Temperature: The batteries inside the Explorer 1000 can safely power devices between 14-104° Fahrenheit. Solar charging of the unit must happen above 32° Fahrenheit. 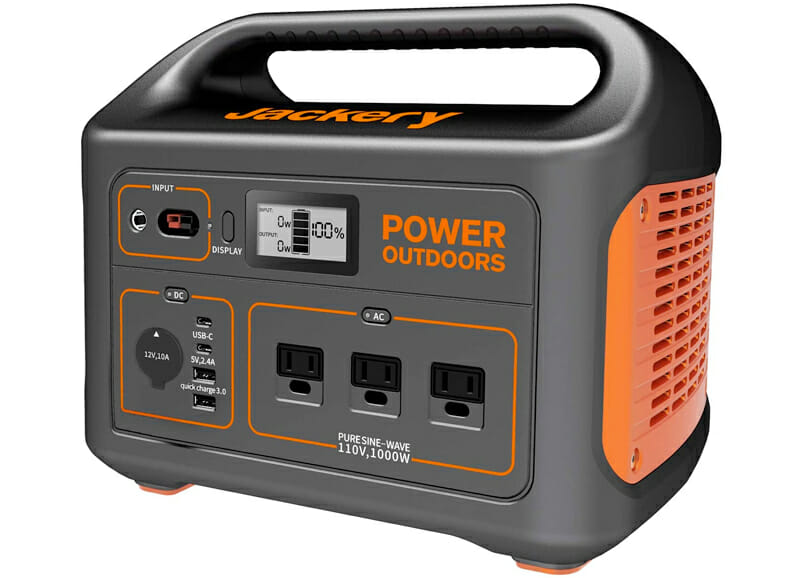 Like any solar generator, the Explorer 1000 can be charged in three ways: with a household wall charger, a cigarette lighter car charger, or using a portable solar panel.

Household wall charger: This is the fastest way to charge your solar generator. To go from 0-100% charge will take about 7.5 hours.

Car charger: A full charge will take about 14 hours when using a cigarette lighter.

Portable solar panels: With full sunlight, a 100W solar panel will take about 17 hours to charge the Jackery Explorer.

Which solar panels should you buy?

Jackery sells a 100W portable solar panel that is fully compatible with the Explorer 1000. It comes with the necessary cables to plug directly into your power station.

Alternatively, you can plug a similar 100W solar panel into the Explorer using an MC4 connector.

One cool feature built into the Explorer 1000 is an LED flashlight on the side. It doesn’t replace a dedicated light source but is great as an auxiliary light for quick trips and to organize your gear. It’s easy to find in the dark because it’s attached to a giant box with orange rectangles on it, rather than the small black tactical flashlights and cell phones that can hide right in front of you in the dark.

The light was a little extra feature that we thought would be gimmicky (and it kind of is) but proved to be useful when camping.

Learn more about the Explorer 1000 and Jakery’s other products on the Jackery.com official website Check out these related articles: