Looking to charge a couple of laptops on the go? Maybe you want to power a portable refrigerator and vent fan in your camper van. Solar power is quickly becoming the most accessible and environmentally friendly way to charge electronics.

But electricity is complicated. Not everyone is capable or willing to do the research to build their own off-grid system. That’s where solar generators come in!

Solar generators are the perfect power station to take camping or on a long road trip. They require little knowledge to operate and can keep your devices fully charged–even off the grid. 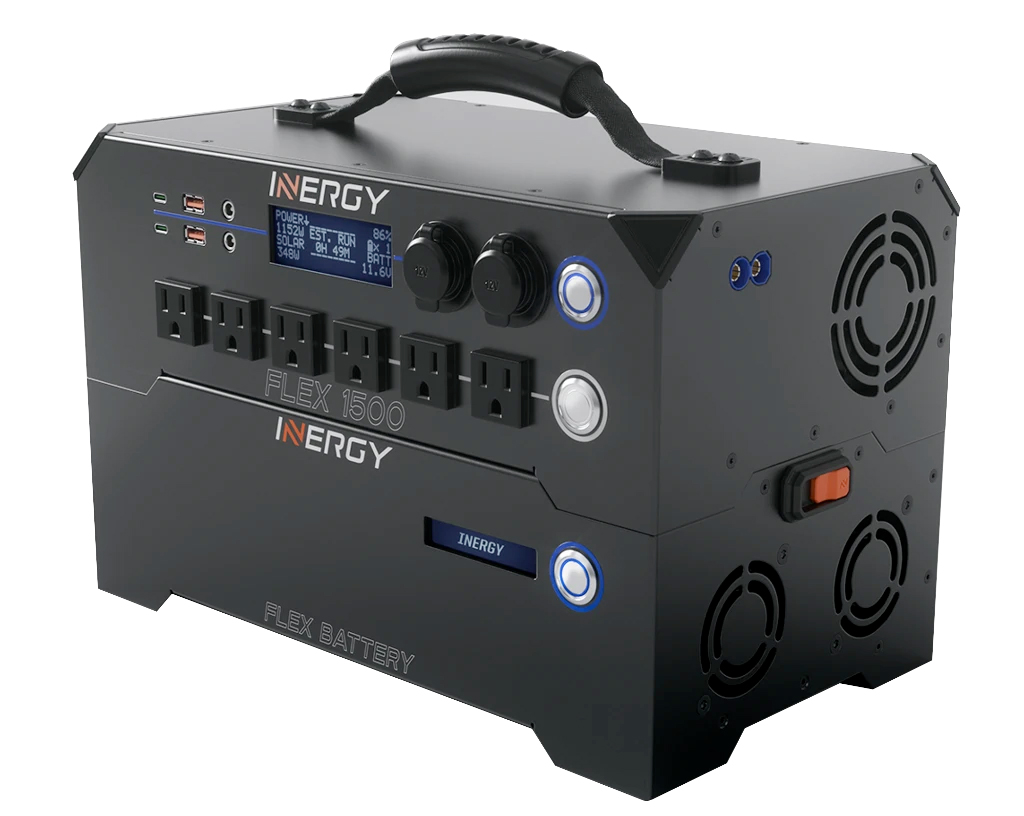 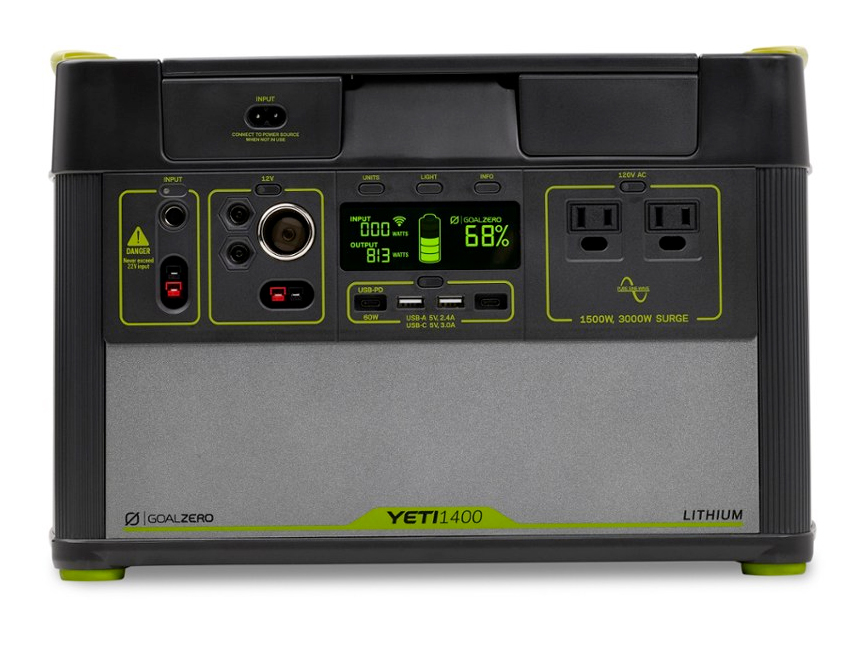 What is a solar generator? (and what it’s not)

A solar generator is essentially a battery system in a box. This is not to be confused with a gas generator. Solar generators do not generate power, as their name implies. They simply store electricity that is given to them for later use. In fact, this electricity can come from many sources; solar panels aren’t even an essential component!

Think of a solar generator as a plug and play power device.

A solar generator comes with almost everything a full electrical system has: a battery, inverter, charge controller, battery monitor, and wires all in one box. The only thing its missing is a solar panel!

Because “generate” is a misleading term, we will refer to them as power stations in the rest of this article. Power stations can be used with portable solar panels or integrated panels attached to the roof of your vehicle. They can even be used as a back-up battery to your current setup.

Who is a power station good for?

Any car camper can take advantage of a power station. These all-in-one devices can be charged at home and then thrown in your car to have power for the whole weekend. Use a power station in this way to keep a portable fridge running, charge an ebike or power a fan at your campsite.

Additionally, they are a versatile companion when boondocking. You can set them outside, take them to the beach, or power stereos and speakers far away from your vehicle.

Some people don’t have the time, desire, or confidence to draw up a wiring diagram, purchase components individually and string it all together. Power stations take away a big part of that equation.

You can still have solar panels attached to the roof of your camper and run a refrigerator and fan inside the car. A power station replaces all of the ‘in-between’ components and leaves you with one box to plug everything into.

What are the benefits of a power station?

Plug and Play: Portable power stations come with all the parts of a traditional solar system without the tedious task of assembly. The battery, inverter, charge controller, monitor and wiring are all packaged as one. Simply plug your laptop, phone, refrigerator or television directly into the box and you’re good to go.

Safe: You don’t need to know much about wiring or how to design a power system with a power station. The only thing you need to keep track of is the charge.

No noise: Like a traditional solar system, power stations are silent and you’ll be able to sleep or work in peace.

No fumes or liquid fuel: This is probably the biggest advantage to solar power in general. Solar is a clean source of energy that can be stored safely in tight spaces.

Portability: Power stations are small and relatively lightweight. With a portable power station you are not limited to permanently fixing the device inside the vehicle. Once it’s charged up, you can power your devices anywhere.

More use options: A power station can be used for short trips or hardwired for permanent builds.

Long-lasting: When properly stored, a most power stations can sit for long periods of time – even months – without being maintained.

What are the disadvantages of a power station?

Less power for your money: When you buy a power station, you’re paying for convenience. The price of buying each individual component of a solar system is going to be significantly less expensive overall than purchasing it as an all-in-one box.

Stuck with the component selection: With a power station, there are less customization options to tailor to your build. You won’t have the freedom to switch out or upgrade components. If the powered box comes with a PWM charge controller for example, you won’t be able to swap it for an MPPT. The same goes for battery types.

Upgrades and repairs: With a traditional solar system you have the option repair components over time if they break. With a power station, you don’t have that luxury and the whole thing must be serviced or replaced at once. Some boxes do allow you to string multiple batteries together but this is not idea for balancing reasons.

Less flexibility with sizing: There are a variety of capacities that you can purchase when it comes to powered boxes. Each year, power stations are getting larger and more efficient. However, in general you will still be limited to a smaller setup than a traditional solar panel system.

There are few companies that produce powered boxes larger than 1000Wh. This is plenty to power a 12V refrigerator, but if you’re looking to go bigger you should build your own system.

Less clean to integrate into a planned build: With a hardwired van, you can have a monitor at the front of the vehicle, batteries in back, and wires running through the walls to solar and electrics. It’s easier mount fixed components out of the way because you don’t need to access them.

With a power station, the entire electrical setup sits in a pre-made box. All of your components and solar panels plug into the same face making for messier wire management. This is a minor detail but something to be considered.

How to charge a solar powered generator

Charging a solar power station can be done in three ways: with a solar panel, a household outlet (grid power), or a 12V car outlet.

This is how you re-charge the station when you don’t have access to grid power. Most brands you purchase the power station through will have recommended solar panels in mind. Solar components are fairly universal, so as long as you’re sticking within the specs the power station will work.

Tip: You can charge the powered box faster by placing solar panels in direct sunlight, tilting them in the direction of the sun, and keeping them clear of dust, snow and shade.

Solar suitcases are portable solar panels that work the same as standard solar panels but come with a carrying case and fold up nicely.

This is the best solution if you are a car camper or weekend warrior. A power station can be charged with a household outlet before shorter trips with no solar required. Then you simply charge it again when you return home.

Some power stations give you the option of plugging into a 12V DC car outlet. Car plugs only output a 5-10 amps so realistically it would take hours to charge a power station in this way (the bigger ones take 24 hours from empty).

Using a car outlet is a possible; though not an efficient solution, and really best for people driving frequently.

Caution: Don’t use the 12V car charge port for long if your car is not running, as it will drain the car battery. And don’t idle your car for long periods of time because it’s bad on the motor.

What to look for in a power station

There are numerous companies on the market that make power stations. The top two things you should look for is the power station size and its components.

How much power should you get?

Jump to the tech specs on a power station and take a look at these numbers:

The solar input will tell you how many watts of solar you can hook to the power station, The battery storage will tell you how much energy can be stored total. You should have a rough estimate in your head of how many Watt hours you will need to power your devices. If you don’t know, take a look at our electricity calculator.

In general, if you’re planning to power larger devices like a 12V refrigerator, vent fan and other electronics take a look at power stations over 1000Wh. If you’re just looking to charge up a cell phone, laptop or tablet, choose a smaller power option.

What kind of battery does a power station use?

Most power stations will have a lithium battery inside. Some older ones came with AGM batteries, but the heaviness and maintenance of them grew out of favor as soon as lithium battery prices dropped.

What you see is what you get with a power station, so keep in mind to check the internal components. Often these will come with base models of charge controllers and inverters. The features you should check are

Hardwiring In A Camper

If you plan to hardwire 12-volt lights, fans, or refrigerators in your camper, look for generators that have “press in” 12-volt outputs like many of the Goal Zero models do. These allow you to run wires directly from the generator in the most efficient way possible.

If you’re looking for a portable power station large enough to charge a 12V fridge, fan, lights and entertainment devices, you’ll want something with at least 1000Wh of power. Better yet, do the math. Take a look at the battery capacity and choose a setup that is closest to your needs.

The Goal Zero Yeti 1400 and 3000 are similar to in build, but the 3000 takes it up a notch with over double the battery capacity of the 1400. Both come with a 1 year warranty and the same 1500W, 3000W surge pure sine wave inverter. Yeti powered boxes cannot be wired for battery expansion. What you see is what you get with these products.

One thing that sets the Yeti apart from the Inergy products is the addition of Wifi. Goal Zero has its own Wifi App that pairs with the Yeti and can give you information on the battery level, and power input and output. You can also turn ports on and off which would be really useful if you don’t want to have to reach into the trunk or behind a cabinet every time you want to make adjustments to the power station.

Aside from the large portable power stations, there are numerous smaller options available if you are only looking to charge a few items like a laptop, fan or cell phones. The main differences between these products are going to be in the battery capacity.

It’s also important to choose products from well-known and reputable companies. Because powered boxes either work or they don’t, we recommend purchasing from a company with a warranty in place.

A power station (aka portable solar generator) works great for weekend warriors or people who simply don’t want to have to deal with the fine details of electricity. Price-wise they’re going to be more expensive than building your own solar setup. A larger power station setup will be adequate for running a 12V refrigerator, vent fan and charging small electronics. Smaller power station setups will work well for keeping phones and laptops charged.

FacebookPinterestInstagram
Follow Us
BUILDING A VAN? WE'VE BEEN THERE. PRODUCT RECOMMENDS
Copyright © ParkedInParadise.com | Disclosure: We are a participant in the Amazon Services LLC Associates Program. As an Amazon associate we earn from qualifying purchases.
Most outbound links are affiliate links - we may receive commission. We are independently owned and the opinions expressed here are our own.
Exclusive Member of Mediavine Travel • Disclosure • Privacy Policy • About Us • Contact